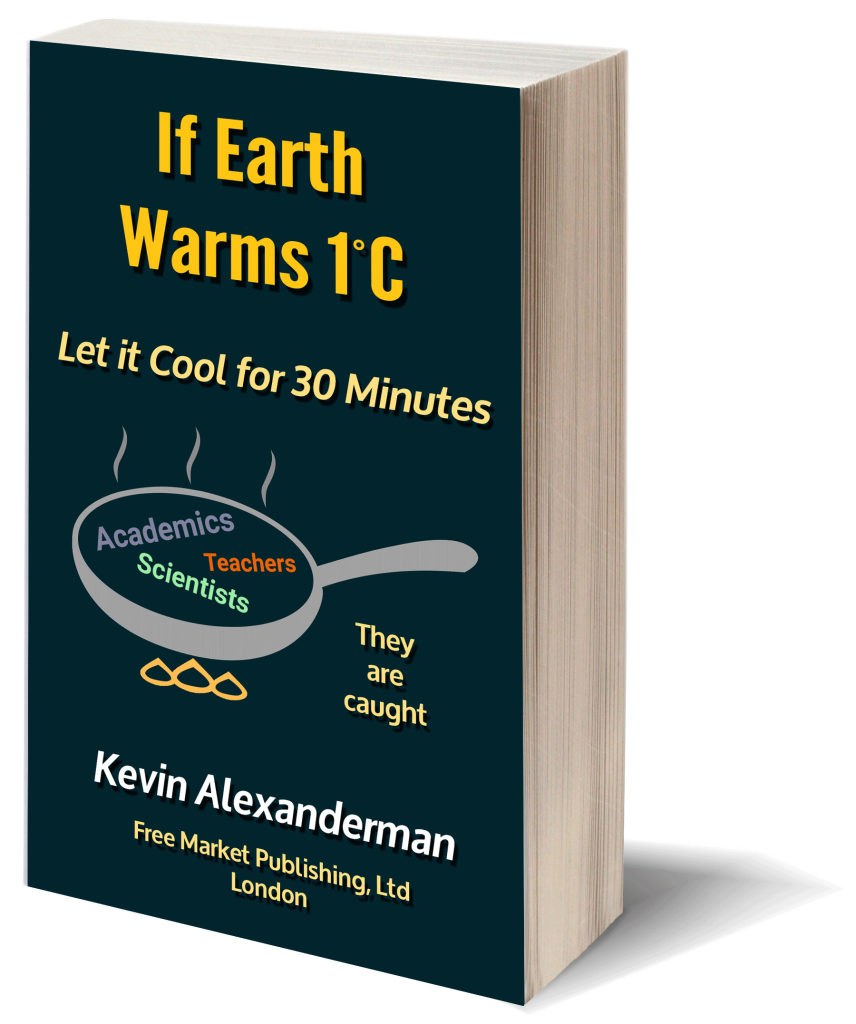 Is the Greenhouse Gas theory valid science? Scientists from both sides of the debate have publicly assumed or agreed that it is a valid theory.

But what are its historic origins, what does it depend upon, is the science sound, has it been thoroughly challenged and dissected?

Author and scientist Kevin Alexanderman, having developed a broad-based new theory of knowledge, including new theories of validation (scientific method), deduction (reasoning), induction (concept forming), lexicology (meaning) and grammatical representation (syntax), which was confirmed in commercial AI software applications used by many G500 firms, took the challenge to test his new theory of validation on the Greenhouse Gas theory.

Every theory should be assumed from the outset to be invalid until demonstrated otherwise—this is sound and responsible science. Mr. Alexanderman had since 2009 felt there was too much evidence against the GG theory, so dug in in a heavy way, reviewing the fundamental physics, dialoguing with major scientists in the field, and positing new explanations for the scientific assumptions, vetting different possibilities, with public analysis as Editor in Chief of the Climate Science Journal.

The results of this multi-year thorough review are startling and differ strongly from the consensus. But many individuals are agreeing with the outcome of his work, including world-class scientists and industrialists.

The book explains how the heat from Earth, radiating because it has been warmed by the Sun, escapes to space in a very short time.

The evidence for this heat transfer happens every day right in front of us. When the Sun begins to set, the surface under it begins to cool. At noon, the atmosphere is usually is near its highest temperature. Three hours later, it is cooler. At night, sometimes it cools by up to 40˚C in some regions. Of course, when a warm front passes, or a cold front, the temperature varies at night, and through the day.

But all else being equal, the Sun’s setting allows the radiation from the planet to pass into space very quickly.

We experience during a solar eclipse a drop of 5-20˚C in less than 30 minutes, for example. Take the Sun away by hiding it with the Moon, or even with passing clouds, and the thermal energy is on its way into space. Luckily, we have the Sun to keep us warm, otherwise, the planet would soon—in hours or days—cool to a frigid, deadly temperature, and all life would cease.

Putting this into perspective, whatever slowing of cooling that CO2 and other, so-called “greenhouse gases” have on the Earth, they only do it for on the order of 30 minutes. After that, the air has had enough time to radiate all its heat to space. The air only remains a stable temperature when the Sun is there to warm it, or the ocean/land heats it. When the source of energy is gone, then the air begins to drop by radiating thermal energy to space.

It is true, humans warm the planet. We warm it by burning fuels, for cooking, heating our homes and offices, transportation, and industry. The heat is released by combustion, and very soon thereafter radiates into space. We build parking lots and rooftops, which themselves absorb solar radiation, and keep their surroundings a little warmer, for a little longer. We build nuclear plants that warm the planet. We make solar panels, which convert solar energy into electricity—energy that might otherwise be reflected back into space.

Some heat is absorbed by molecules in the air. It then stays in these molecules for nano-seconds, passes onward, some down, some up, some sideways, and in 30 minutes or so eventually all of it radiates into space.